I'm writing from RMBL where on the 17th we skied in (again), dug out our water, got my cabin opened and cleaned (no mice over the winter--yea!!!), moved the bicycles out of our RMBL lab, and began another year of marmoteering! Started in 1962, this makes it the start of our 58th year of following our furry friends.

I've spent the past days training up the new members of our spring crew (Karen, Megan and Sam) who along with two returnees (Dana and Gina) will be responsible for documenting emergence from hibernation, looking for any evidence of reproduction and quantifying social behavior during the peak time of their social lives. Everyone is GREAT! And, I have to say that the marmots and weather have been very accommodating. Only one group was up when we got here and others are starting to emerge slowly.

Dandelion--RMBL's resident alpha male emerged a few days before we arrived and when we started looking at him last Thursday, was just starting to explore town. A number of his children with Stitches (his main wife and hibernaculum mate) popped up and began to play (which is great for training folks). Over the past two days I watched Dandy wander around checking out burrows that might contain his other wives. But what he was really after was a mouthful of dry plants that he determinately brought back to his burrow. The best part of this was when he reached the Gothic Road--which was covered with between 1 and 2 meters of snow--and looked both ways before crossing. (I kid you not!) His yearlings played in the burrow entry and we heard one alarm call in response to a crow today (crows are no threats!). The bigger issue is that a pair of foxes wintered in the Johnson meadow, a hundred or so meters from their hibernaculum and they're all casting wary eyes out for the foxes--an encounter with one could be fatal. 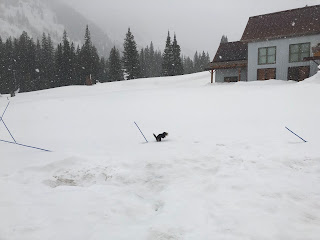 We've not seen coyotes but have heard them and seen tracks...but not as many as usual. Dana and I were up valley when the first marmots from up valley emerged at Picnic and today Gina saw marmots emerge at Marmot Meadow into a Cormac McCarthy like post-apocalyptic landscape.

This is because the the real up valley news is the HUGE avalanche at Marmot Meadow. Pretty much all of Avery ran down and blew through Marmot Meadow knocking down many trees and littering much of it with timber. This was a year of 300-350 year avalanches...which means 300-350 year old trees are wiped out by a very large and rare avalanche. Other parts of the valley had equally huge ones and River Mound got a haircut! Half of the trees are now scattered across the meadow.  A slide this large off Gothic has not occurred since I've been working here and River Mound has never been hit like this in the past 58 years. Such landscape altering avalanches are rare. But there was a lot of snow this winter and a 2 meter storm in early March generated a record-setting avalanche cycle.

Below you can see the timber thrown out several hundred meters across Marmot Meadow. 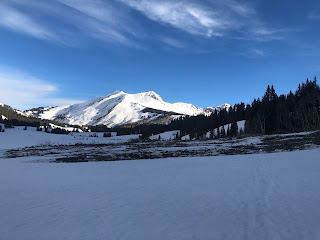 Early in the year I sometimes see ptarmigan down by the road. Yesterday I saw them outside my bedroom window! The group of 9 blended in perfectly with the snow. There's one cryptic one below. 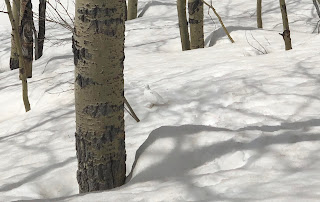 I write this on Earth Day. We've been setting high temperature weather records all week. We've lost about a foot of snow since we all skied in. Rain is forecast in some afternoons. This is weird weather--we often watch marmots this time of the year shivering...but instead it's been sunny and in some places and times over 50 degrees F! We all have been pouring on the sunscreen... But these changes portend poorly for the marmots. Emerging early because of the temperature to a landscape filled with snow means that they will have to live on their fat for at least a month. In years like this we lose a lot in the spring. Fingers crossed that our furry friends can weather this highly unusual weather... 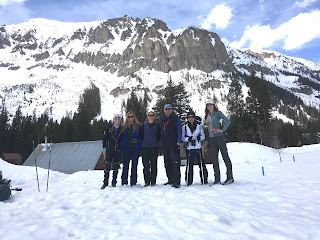 Consider following us on Twitter (@TeamMarmot), and our brand new Instagram feed (@rmblmarmotproject).
Posted by Daniel T. Blumstein at 2:54 PM