An evening rainbow: a sign of good things to come

We've been finally getting some rain! Whereas this might not seem like a good thing at first, this will be great for the marmots. As we reported in our last blog entry, this has been a hard winter for our marmots and they have been patiently waiting for the growing season to begin. 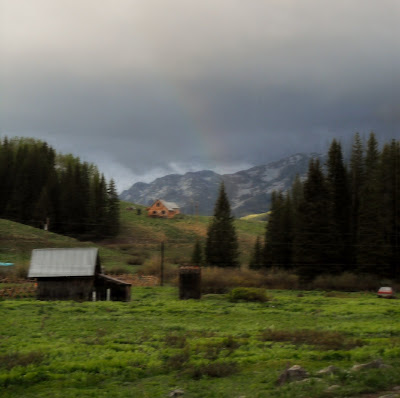 We have been now had several rain showers and things are finally getting really green here. Tonight, we even had a rainbow over Mount Crested Butte--a.k.a. Mount C.B. If you look carefully, then you'll be able to see it above the mountain, right above the pot of gold!

Posted by Jennifer E. Smith at 7:20 PM No comments:

Well, it's late June, the snow's finally gone, all marmots have finally emerged and we're figuring out what happened last winter.  First approximations suggest that we had unprecedented mortality:  50% of the adults died and over 80% of the pups died since early September last year!  It was a remarkably long winter--one of the three heaviest snowfall years--very delayed snowmelt...not so good for marmots.
To put this into perspective, your average adult female has a 10% chance of dieing each year and about 50% of the pups survive to be yearlings.
How will this affect our research?  Well, the population biology studies march on...these are natural data.  However, sample sizes are smaller for some of the experimental work this year.  With luck, the population will begin to grow again next year.  But, strange things can happen to small populations...a few too many road kills...some additional predator kills...a few females unable to find males to mate with...and the population could crash more.  Indeed, this sort of randomness that happens at small population sizes is one of the primary reasons why we need to maintain large populations if we're to ensure their survival.
Long term research has many surprises and going from the largest population size to the biggest population crash was certainly a surprise for me.
Posted by Daniel T. Blumstein at 11:53 AM 1 comment:

Email ThisBlogThis!Share to TwitterShare to FacebookShare to Pinterest
Labels: News

Last Sunday two marmoteers, Yvonne and Benison, along with hermit-crab-enthusiast Noelle, graduated from UCLA!  Yvonne had her name introduced as "Yvonne, I Love Marmots, Chi" as she was walking onto stage to be congratulated and she had added ears to her mortorboard (go Yvonne!).  Sadly, I was too busy shaking hands and handing out diplomas to hear it :(
Photographic proof is below.
Noelle, Dan, and Yvonne


Benison and Dan
Posted by Daniel T. Blumstein at 11:43 AM No comments: