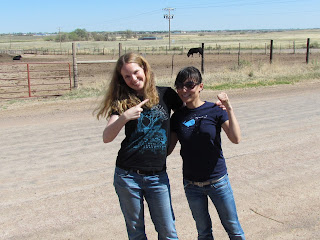 This weekend Tina Wey (former "Team Marmot" graduate student, now an NSF postdoctoral fellow in Andy Sih's lab at UC-Davis) and I met with researchers at the University of Wyoming for an exciting conference on social networks. The photo above depicts the two of us (Jenn on left and Tina on right) pointing out the landmark used in our local directions indicating that we were to "turn right at the black cows (see above)" on our way from Denver to Laramie, Wyoming. Something told me that I was no longer in LA! 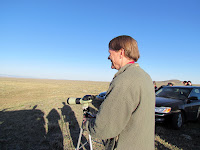 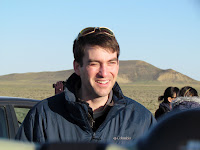 Our local hosts, Dave McDonald (left, above) and Andrew Edelman (right, above) graciously organized this amazing symposium around the theme, "Network Science in Biological, Social and Geographic Systems." Talks and posters covered topics ranging from networks among basketball players to cooperation/social networks in animals of all shapes and sizes. Some of the animal networks were comprised of manikins, ants, hyraxes, spotted hyenas, elephants and (of course) marmots. My talk on sibling and maternal effects on the social integration of marmots was well-received.

In addition to the exciting conversations and seminars about research, we also visited a local sage grouse lek (see below--if you have a microscope, then you might able to see the gorgeous birds--23 males dancing for a single female!). 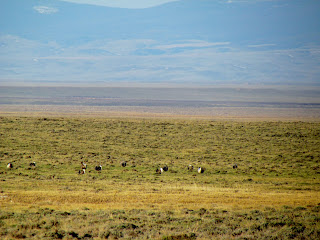 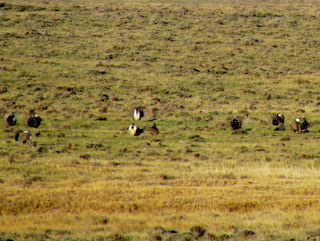 Well, it's that's time of the year; marmots have started to emerge! Team Marmot has arrived at RMBL and billy barr saw his first marmot in Gothic on April 16th.


However, Team Marmot DROVE IN. This is absolutely unprecedented. Typically the road opens in mid-May.  In light snow years, the road opens in early May and has to be plowed.  This year it just melted out...kinda reminds me of Frost saying that the world will end in a whimper...


This will become an important year because we will get a better idea of the plasticity of marmot emergence from hibernation.  This is an important thing to sort out because it will give us an idea of what happens when climate change causes the snow to melt even earlier.  How flexible are the marmots?


The team (I'm stuck in LA) saw a few marmots down valley yesterday.  They were up valley today (TEAM MARMOT: if you're reading this you should post some pictures and reports!).  My guess (and we'll see if I'm right) is that marmots will emerge on an early schedule but there will still be some small groups which continue hibernating even after most/all of their snow is gone around them. If so, this will show that there is some interplay between an individual's 'schedule' and external environmental conditions.  By contrast, the mule deer always make it up to RMBL the last days of May and the first days of June, an observation that suggests, to me, that they're following some photoperiodic clock.


Despite years of study, we've still not got a really good idea of what cues they use to emerge from hibernation.  Here is a case where we really could use some financial support to properly instrument both the marmots and their burrow and we would get a much better idea of what was going above ground when they had their last bout of deep torpor.

Who doesn’t love the hoary marmot?
To be fair, plenty of people outside of a couple traditional and accredited online masters programs or an overzealous Zoobooks fan might never have heard of them. While they are native to North America, unlike most other members of the Marmota genus, they keep to the mountains and alpine meadows of the Pacific Northwest, mostly hidden away above the tree line in Alaska, British Columbia or Washington.
But that hasn’t stopped them from becoming a sort of mascot for the national parks and mountain resorts where hikers stand a chance of spotting one, or hearing that telltale whistle they make to warn their colony about intruders. They’ve inspired merchandise from T-shirts to water bottles, shot glasses and iPad cases. According to their information guide, the British Columbia town of Whistler even chose its name because of the sound the marmots make.
Once you’ve met one of the little guys, it’s not hard to figure out the appeal. The lucky marmots get all the love because thanks to a simple equation: They’re cute, they’re memorable and they live in scenic places.
Hoary marmots, or Marmota caligata (that’s Latin for “boots”), share the inherent appeal of their cousin the groundhog, who has the appearance of a chubbier, more dignified squirrel. They’ll even get up on their hind legs to make a striking pose while they’re getting a look at you. But hoary marmots are the biggest ground squirrels in North America, with distinctive black boot-like feet (hence the name) and a look that falls somewhere between that of a prairie dog and a seal.
But what might really set the whistlers apart from their Marmota brethren — apart from all that whistling — is location. While groundhogs live in flat land spread across half of North America, the hoary marmot is rare enough to be something special. And the Washington Trails Association points out that they tend to inhabit some pretty scenic spots, like Mount Rainier and the network of trails that run through the Rocky Mountains and Cascades. Plus, they’ll eat some of the prettiest flowers.
The hoary marmot is a common sight for those who venture up into their habitats, enough that resorts can organize special marmot-sighting tours. The species has “Least Concern” status from the International Union for Conservation of Nature, but at the same time, the University of Michigan’s Animal Diversity Web points out that two subspecies, the Montague Island and Glacier Bay marmots, both of which are native to small parts of Alaska, are subjects of concern thanks to their very specific habitats and tiny population sizes.
And just like any species that makes its home in the alpine wilderness, the hoary marmot’s future depends on keeping that wilderness unspoiled. That’s another thing that makes them a good mascot for the Northwest and all its natural beauty, especially the resorts, whose livelihoods depend on the wilderness too. In their own, much less majestic way, hoary marmots do for wildlife what the giant redwoods do for trees: Take something that’s familiar to Americans, then super-size it and place it in the most amazing scenery you can find.
Posted by Daniel T. Blumstein at 9:35 AM No comments: