An outbreak of plague is reported in Central Asia.  The first fatality was someone who ate BBQ marmot. Plague has a long history of outbreaks in Central Asian and Russian marmot colonies and has killed millions over the years.  These days, early detection is essential for survival post infection.
Posted by Daniel T. Blumstein at 10:03 AM No comments:

Jenn Smith, a Blumstein alum, and I recently participated in the Animal Behavior Society outreach fair in Boulder, Colorado. Our exhibit featured how researchers are able to identify individuals in a group. 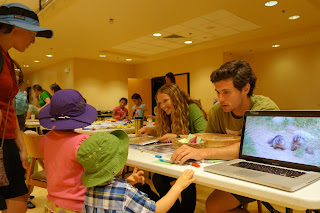 Before I get into our exhibit, let me go back a bit and explain why we presented this subject. The Blumstein lab and Jenn's new lab at Mills College study social behavior and its fitness consequences. A major issue when studying this phenomenon is how to know who interacts with whom. How do we tell individuals apart? In some taxa, you can use natural variation in fur color or marks like scars. A great example of this is the spotted hyena. Researchers use the variation in spot patterns to identify individuals, and can thus tell who initiated social interactions like who lost a fight and who is getting groomed by whom. Unfortunately, it is another story with squirrels. Their fur is often very similar in color and are also much smaller than hyenas. This makes them hard to spot and watch. How do we fix this problem? We give each squirrel a unique hair dye mark. Most of the time we keep it simple using letters and numbers, but every once in awhile we get creative and draw stick figures or intricate designs. 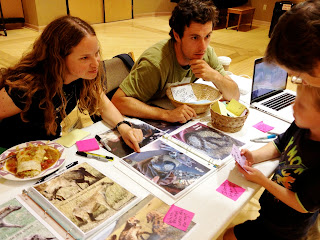 Back to the outreach fair--as children approach the table, we give them pictures of hyenas and ask if they can tell them apart. All of the children realize they can use the spots to find differences among individuals. That's the easy part. When we ask them if they can tell squirrels apart from one another, most shake their head no in response. We show them how we trap the squirrels and give them marks. When we tell them that we need their help in coming up with new marks, they are more than happy to draw some great designs for us. Some wonderful examples include a snowman with long stick arms, a very intricate fish, and some wild flames. Most kids are also drawn to the video of marmot pups playing together. I ask them if they could describe the behaviors. Most came up with some great descriptions for wrestling, pushing, and biting. 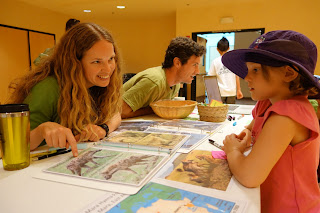 All-in-all, it was a rewarding experience for both Jenn and I, and we hope the public enjoyed it as well.

Posted by Matthew Petelle at 4:26 PM No comments:

Summer research has come to an end here at the Rocky Mountain Biological Laboratory, so our undergraduate students presented their findings at the annual symposium.

Lilah Hubbard joined us for fieldwork from our lab at UCLA. Her research focused on the effects of group size on social structure in our female yellow-bellied marmots. 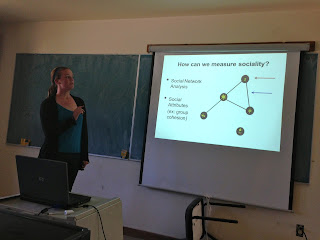 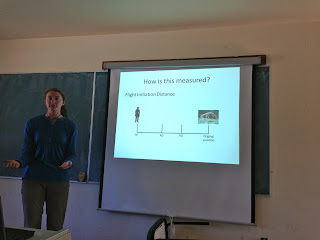 Our lab members mentor students interested in the behavior of animals other than marmots as well... 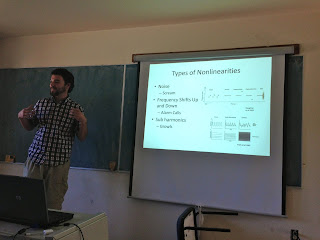 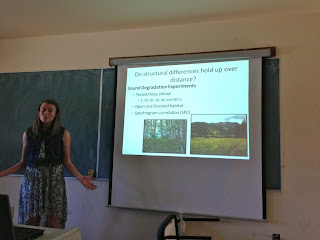 Posted by Unknown at 9:26 PM No comments:

Here's a brilliant artist who's looking for funds (today's the last day!) to support a marmot chess set project. Check out these characters! 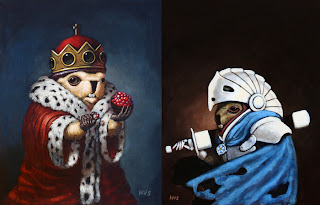 Posted by Daniel T. Blumstein at 7:54 AM No comments: 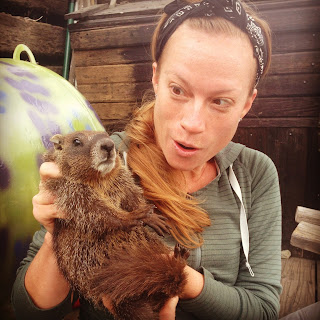 I've been at RMBL since mid-April and absolutely love it here. I've done fieldwork in the past but have never been at a field site for such a long time, so this has allowed me to become completely immersed in my work. Plus, the hiking and biking opportunities around here are exceptional :)

In addition to the standard observations and samples we collect when trapping, I am stabilizing RNA from the marmots in order to look at genes expressed in their blood. I aim to compare the expression profiles of different phenotypes in order to see how environmental conditions can affect the genetics of individuals and, in turn, how these profiles may alter an animal's physiology.

For instance, I think it will be interesting to compare marmots that consistently exhibit signs of high vs. low stress (based on behavioral and physiological data). Studies of other (mostly model) organisms show over-expression of anti-inflammatory genes and under-expression of anti-viral genes in stressed individuals so it will be interesting to see if these patterns persist in a natural population.

I am also interested in the underlying mechanisms that occur when an individual prepares to disperse, so I focused on collecting RNA from our yearling marmots this summer. These guys will likely be exposed to new pathogens during this journey and will travel much further than they ever have in their entire life, so I expect dispersers to show a different pattern when it comes to metabolic and immunological genes.

In order to do this, I have to first build the marmot transcriptome, which is basically just the transcribed regions of the species' genome. This may not look like anything special, but it took me months of quality control and program queries to get this figure, which shows RNA sequence data that aligns to the 13-lined ground squirrel genome. 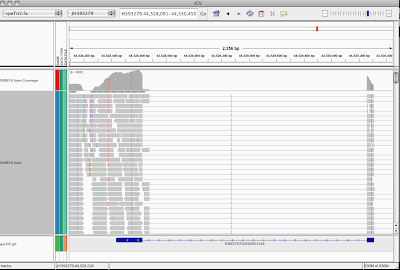 The lowest window here represents the squirrel genomic sequence: exons are blue blocks and introns are the lines with arrowheads. The large middle window displays marmot sequence (from one individual) that aligns to the squirrel genome, with each line representing a unique expression of that sequence.

Note that the majority of the marmot sequences (small gray squares) align with the squirrel exons. This was the highlight of my week because RNA should only be exonic sequences, so this means I've done something right! Success!

The next step is to identify the genes being expressed based on homology in other organisms (such as the squirrel and mouse) and then to quantify expression values. So expect to hear more from me once I make another breakthrough...
Posted by Unknown at 6:10 PM No comments: