At first glance, the marmoteer may appear to be your run-of-the-mill person going through day to day motions: walking to class, reading papers, sitting at a laptop, eating the occasional snack.  In reality, though, marmoteers are artists in the field.

Marmoteers watch marmots and record which burrows they enter and how they interact with each other.  In order to know which marmot is which, marmoteers spend a great deal of time painting unique symbols or designs on each marmot's back.  In marmoteer lingo, we call this "marking" marmots.  Marking marmots helps us to pick out patterns in individual marmots' behaviors.  Some marmots tend to be bossy, others are friendly and playful, some are lazy, and others are shy.  Marking marmots helps us tell which marmots are still alive and well and which have been snatched up by a predator or did not make it through the winter.

Marking marmots requires creativity, a steady hand, and patience.  We must hold the marmot so it doesn't bite us and, at the same time, paint the design on the marmot using a tooth brush and cattle dye.  The dye does not hurt the marmot, and it lasts a long time until the marmot has grown a new coat.  Some marmots are squirmy, and they are difficult to mark.  Other marmots have chill personalities and sit serenely as we paint them a beautiful mark.  Marmoteers try their best to paint marks that are easy to paint and easily identifiable with a spotting scope from several angles.  This task becomes tricky when we have many marmots in the same part of the valley.

All marks must be different, so we are constantly trying to come up with new marks for the babies.  When we were desperate, I created a few of my own this summer.  Treble Clef and Rocket Ship did not turn out very good but Basketball and Sailboat were great.  Letters, numbers, Greek symbols, blobs "blots", and lines are quite common.  Without a doubt, marmoteers will be looking for more mark ideas this summer, so send them our way.
Posted by Allie Marie at 9:13 PM No comments:

The Trials and Triumphs of Marmoteers: Field Observations 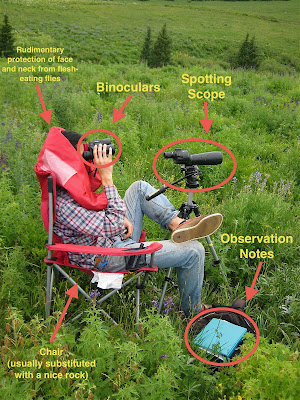 After reading a few of our blog entries, you may begin to suspect that the life of a marmoteer is by no means glamorous. I (Yvonne) can help confirm your suspicions.

Consider the picture on the right of my fellow marmoteer, the Leon.

Leon is making his third hour of observations in the River colony on a hot, mid-July, and absolutely marmotless afternoon.

As Dan wrote in an earlier entry, observing marmots is all about patiently waiting. This waiting could result in sitting through sun, rain, hail, snow, flesh-eating flies, and sometimes all of the above within half an hour, in repetitive succession. BUT. As soon as that first patch of brown fur darting through vegetation is glimpsed, discomforts are temporarily forgotten, replaced by a mild sense of victory as this observation is quickly recorded.

On a typical summer morning, marmots come out of their burrows at around 7:00. We try set up at our assigned observation sites before they emerge so that we don’t miss out on any of the action. Binoculars are useful for quick scans of the area for marmot activities. But the enhanced magnifying capacity of a spotting scope is usually necessary for identifying the individual’s mark.

Every marmot’s location, action, and interaction must be recorded in order to generate as complete as possible a database on which numerous ongoing studies are dependent. Thus, we dutifully record the time, location, and a detailed summary of each event, such as when Five Dice Dots cheek-rubbed (scent marked) the rock on Six Dice Dot’s burrow (oh snap!); or when IX alarm called 283 times for fifteen minutes straight because first some kayakers and then a fox (predator!) swung by its place; or when Happy Face was foraging by tower mound but then Mickey Mouse chased and beat the bejeezus out of (play wrestled with) him.

Observation sessions usually run for about two to three hours. After the morning session, we regroup, trap marmots, break for lunch, then do it all over again in the afternoon. Long hours of waiting are rendered exciting by the occasional spectacular showdown. On my last day of observing up valley, I watched, as if in Planet Earth high definition slow motion mode, an eagle swoop down and snatch a marmot pup off a rock just 20 feet away!

There are other rewards, of course. Consider, for instance, the view that Leon enjoyed during that marmotless afternoon. 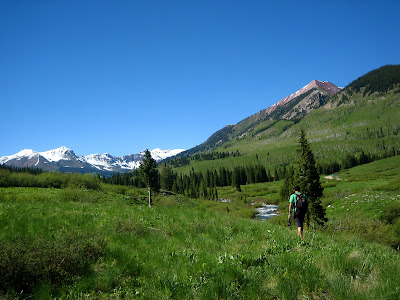 Posted by Yvonne Chi at 9:00 PM No comments: 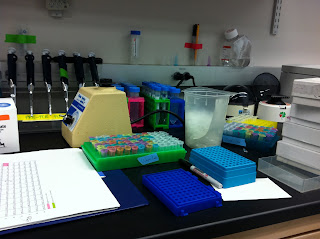 At the moment, this is what a typical day looks like for me. Here you see a collection of DNA samples, PCR tubes, pipettes, and a binder full of sequence data.

My research spans the disciplines of behavioral ecology and genetics in an attempt to link genetic differences among individuals with their behavioral consequences. I've spent a good deal of time in the field (see my other posts) observing and recording social interactions between individuals. In collaboration with my other marmot lab mates, I've also used quantitative genetic methods to estimate the relative importance of an individual's genetics vs. immediate environment in determining their actions in a social setting. Using this approach, we determined that an individual's genes do indeed influence it's social life and behavior...but which genes?

Quantitative genetics is a powerful tool for estimating heritability and identifying factors that explain variation in a trait, but to link a specific gene with individual differences we need to take another approach. Unfortunately, marmots are not a genetic model organism (like fruit flies, mice, or flatworms) and little is known about their genome. Therefore, I am targeting genes of demonstrated importance from closely related species and making an educated guess (a hypothesis!) about their function in marmots. I'm focusing on genes from the major histocompatibility complex (MHC), whose protein products play a crucial role in mammalian immune systems. Furthermore, we know that a marmot's body condition (a measure of overall health and vigor) influences it's social behavior, adding further support to my hypothesis that genetic differences at MHC loci influence social behavior. Theoretically, individuals with robust immune systems (coded for in their DNA) and superior body condition are preferable social partners; I know I would rather interact with a healthy friend that is less likely to get me sick!

So I am currently sequencing MHC genes of 48 marmots (some highly interactive, others quite antisocial) to get at this question. It requires lots of long days in the lab and lots of time in front of a computer screen...but I know the results will be worth it. Stay tuned for updates on how genes influence marmot social behavior!

Posted by Amanda Lea at 5:32 PM No comments:

News Story on Hyenas Greeting their "Friends": Who do Marmots Greet? 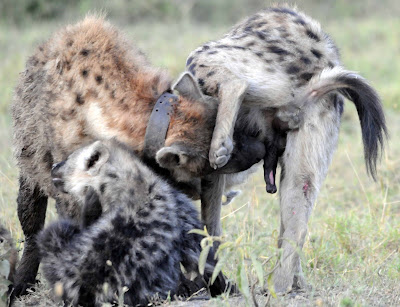 You might be wondering what the photo above (of two adult female hyenas greeting each other) is doing on a blog about marmots. Please let me explain...

In my doctoral research, with Dr. Kay Holekamp at Michigan State University, I studied spotted hyenas. Our new paper on the subject is now in press at Animal Behaviour and will be officially published in February.

This research was just covered by reporter Victoria Gill at BBC News Earth in her story entitled, "Hyenas 'greet friends' to ask for their help". Check out this news story, and other news coverage below:

Visit my website to learn more about studies on cooperation and to see videos of hyenas greeting!

Greeting confirm social bonds among "friends", especially among genetic relatives, before hyenas engage in risky cooperative behaviors such as attacking lions (see below).

As part of "Team Marmot", I am now investigating how greetings structure affiliation networks among yellow-bellied marmots. Although marmot greetings take-on quite a different physical form, I am asking how greetings function to structure marmot social networks.

Tina Wey and others from our lab recently showed that marmots, like spotted hyenas, tend to greet their kin in affiliation networks more often than they greet non-kin. My work on maternal effects will extend this finding. It will be interesting to learn whether convergent selection pressures also favor greetings among genetic relatives in marmots.

Posted by Jennifer E. Smith at 8:00 AM No comments:

Where are all of the marmots?: Emerging from hibernation

We start the field season in mid April. That’s when marmots wake up from hibernation. There is always a lot of snow, which might last for another month or so. It takes a while to habituate to the silence and quietness, especially coming from a city like Los Angeles. But it is breathtaking and probably my favorite season. Every morning we visit the locations where we know there were marmots the year before (and for the last 50 years, as marmots are quite faithful to their burrows). When we get to one of the marmot colonies, we sit in the snow for a while, and we write down if we see any marmots. 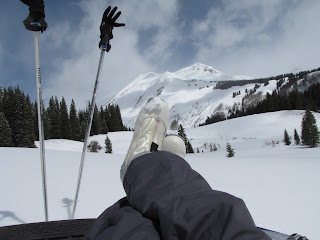 It can take days to see the first one, but when we see it, it’s very exciting! I get impatient to see which of the youngest animals will emerge. They are the ones that were born the previous summer, and as hibernation lasts so long (around 7-8 months), many of the little ones do not make it. 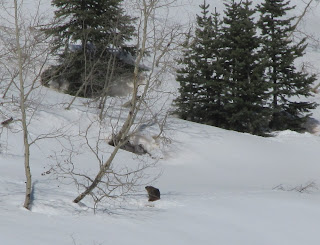 When one marmot emerges, we try to identify it. We recognize them because each marmot has an individual mark on their back. We draw these marks with black dye and a paintbrush. With spotting scopes, these symbols are easily identified, even from a far away.

Posted by Raquel Monclus at 5:40 PM No comments: