Have you ever heard a marmot's alarm call? I have! It's a distinctive, high-pitched, whistle-like sound that could be clear and piercing, or pretty noisy.
Marmots alarm call when they get scared, be it from predators trying to eat them... 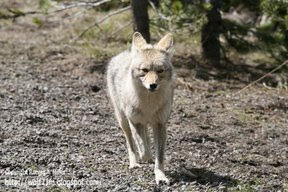 ...or from marmoteers trying to bag them (to take their measurements). 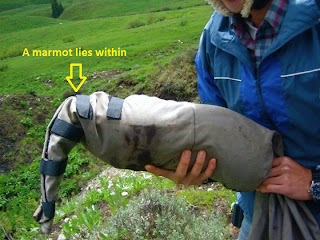 The question is - whether the marmot alarm call, this sound of fear, can be a quantitative measurement of just how scared these marmots are. This is what my past year's research is all about. To read the recently published article on this topic by Dan and me, you may have to purchase access to Biology Letters here. For the short, free version, just read on.
Dan and I hypothesized that marmots would produce clearer alarm calls when they are less scared and noisier calls when they are more scared. We used a measure of noise known as Wiener entropy to quantify the noise within the calls. To quantify fear, we measured the glucocorticoid levels found in marmot fecal samples, with higher glucocorticoids indicating greater fear.
We then extracted seven years' worth of data on marmot alarm calls and their associated fecal samples recorded and collected, respectively, in RMBL. These data were compiled by the marmoteers during the summers of 2003 thru 2009; when the marmots called, they recorded them; when the marmots pooped, they picked up after them, and sometimes quite literally, wiped their butts. (Thanks for all the hard work, guys!)

After repeated analyses controlling for all the variables we could think of, including but definitely not limited to sex, mass, age, background noise, and call harmonics, we got the same surprising result - the marmots are generating clearer, less noisy alarm calls when they are more scared.

A couple days' worth of head-scratching later, Dan and I decided that our surprising result makes sense after all. Positive correlations between heightened stress and clearer calls have also been demonstrated in piglets, dwarf goats, and dogs. Of course, formal experiments will have to be conducted to show a causal relationship between fear and the clarity of alarm calls.
In a more intensely fear-induced state, the marmots' vocal folds are pulled more taut, effecting clearer, more piercing calls. The clarity of the call can, in turn, ensure that marmots in the area who hear the call would clearly receive the message. As such, the fear-induced clarity in alarm calls could be selected for within marmot colonies.

Try putting yourself in the situation of a scared marmot. Are your calls likely to be more or less sharp and clear if you experience a heightened state of fear?
Posted by Yvonne Chi at 9:49 PM No comments:

Field Ecology in the Digital Age

In early 2010, Dr. Ian Billick, RMBL Executive Director, was awarded an NSF grant for a project entitled "Bringing a Field Station into the Classroom." Working with Dr. Amy Ellwein, newly hired from the University of New Mexico, the intention was to make online tools and some of the long-term data sets collected at RMBL available to college students through interactive curriculum hosted on a new website. Many of you know this as the "CCLI project" for the NSF program that funded it. A Division of Undergraduate Education (DUE) program, CCLI (Course Curriculum and Laboratory Improvement) has since changed to TUES (Transforming Undergraduate Education in Science) and the project is now known to many of us as "Digital RMBL".

One year and a few months into a three-year project, the team is very close to initial completion of most project deliverables, and are moving into the testing and improvement stage. Thanks to many in the RMBL community - you know who you are - we have moved beyond expectations in several aspects of the project's scope. For example, two of our project collaborators liked the structure of the natural history pages so much, they've assigned the project to their students. We now have ten times more natural history pages than we promised NSF, with more in the works. If you would like to lend a hand, Amy has more ideas than time to pursue them, just send her an email: amy AT rmbl DOT org. And keep your eyes peeled for the web debut of Digital RMBL in November at http://rmbl.org/rockymountainbiolab/!
Posted by Jennifer E. Smith at 10:19 AM 2 comments: